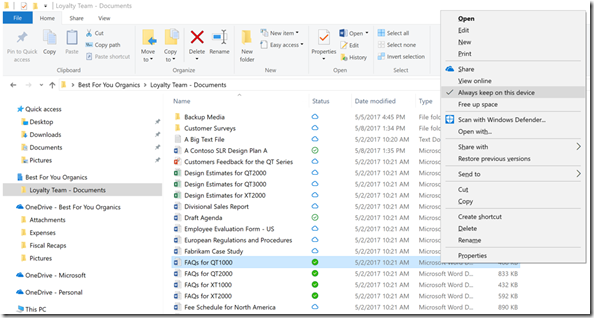 During Build 2017 Microsoft announced OneDrive Files On-Demand. Announced. This feature of the Next Generation Sync Client will be available for all with the “Windows 10 Fall Creators Update”. So we have to wait till autumn. If you are a Windows Insider you will get the version earlier). So what we will get is nothing new. That’s a new Version of smart files.  If have written a lot of articles about Smart files (during these days only in German language)

For those, who do not remember “Smart Files” or “OneDrive Files On-Demand”, I will write some words:

You now have more cloud storage available, more than you have locally. With the Next Generation Sync Client this issue was solved with selective sync. But people do not see in the windows explorer, that there are more folder in the cloud. With placeholders for those folders and files you see all and with one click you may sync the files, if you want it. So that we have had with Smart files and Groove. But only for the Personal Edition of OneDrive (the old name was SkyDrive), But we all know the bad implementation of the old Groove client and also the issues with the smart files.

You have the choice to wish changes also with OneDrive and OneDrive for Business with UserVoice. And Microsoft is reading this channel. And have now implemented the old “Smart Files” technology. But on a better way. There is a lot of things, Microsoft has to do with the Sync Client. Before we have had “Groove”, there was a product called SharePoint Workspace 2010, part of Office 2010. And there you could sync also Metadata, IRM protected files….

But back to now and OneDrive Files On-Demand:

Which Version of Windows 10 will be supported?

Will this require me to upgrade to a new version of the OneDrive (The Next Generation Sync Client) when this becomes available?

The answer is NO. I have described it in other articles, that the Next Generation Sync Client has it’s own Update mechanism.

So here you see the the behavior:

If you want to hear more, register for  the SharePoint Virtual Summit on May 16, 2017