First of all: Thank you for all the letters. Some things are well known, some things, even if they are only small things, have never been heard of before.

I’m happy about that, and if you’re new here, you should read the first three posts first and start with the OneDrive Basics 01.

While in the first three episodes we talked about servers and services, about programs and in the last episode we directly dealt with sharing and Outlook, today we’ll talk about the integration into Windows 10. 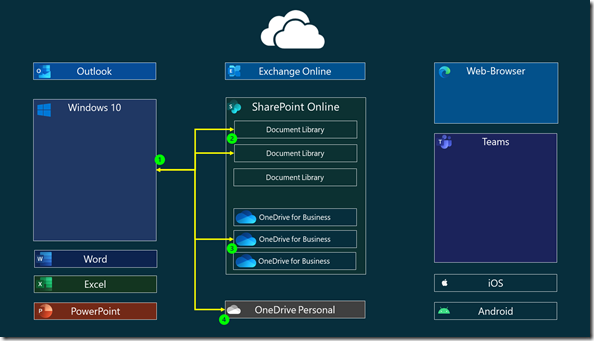 The new Sync Client was already directly integrated in the first version of Windows 10. At that time, Microsoft still spoke of a new development and called the Sync Client also Next Generation Sync Client. But the story started much earlier, the last versions were called SkyDrive and SkyDrive Pro. But Microsoft had to accept a legal defeat in naming it and today the sync service is simply called OneDrive. And from the beginning there were two different directions. SkyDrive became OneDrive, SkyDrive Pro became OneDrive for Business.  The sync engine called OneDrive can serve both goals. 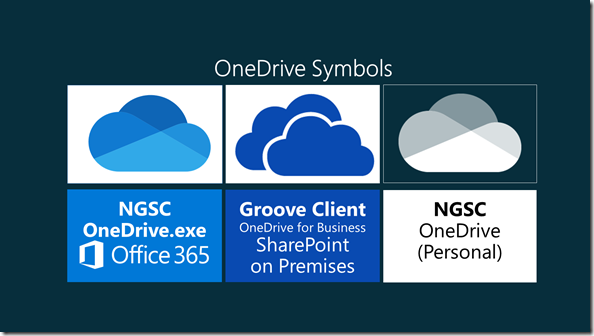 So far, it’s pretty easy. If it weren’t for the many SharePoint On Premises that are also easy to use. Because there are also documents stored there that we want to take with us. To make it easy, only with SharePoint 2019 the OneDrive Sync Client is able to synchronize data. All previous versions of SharePoint Server on Premises must be operated with the old, error-prone groove client.

The best thing about the Next Generation Sync Client, i.e. OneDrive.exe, is the ability to renew itself. Many administrators don’t like it when they have to give up control of client installations. But with all the online severs such as SharePoint Online or Exchange Online, what they were happy to leave behind was patching. And the reimplementation of functionalities. And this is something that Microsoft do well. But with a synchronization program, you have to make sure that new functions on the server side are also understood by the client. So Microsoft built the Sync Cleint to update itself when necessary and Microsoft wants to do so. So he checks every 24 hours if there is a new version for this device. If so, he downloads an installation package of about 40 MB which installs the complete version about 145 MB with all its languages. The user usually does not notice this at all.

And the possibilities of the Sync Client are now manifold. But before it can get started, it must be configured for the respective target. And in the first figure you can see the different targets.

Then we might get an invitation with a link to a document library. With this link I have to open my browser and there, if I want to, synchronize the files or the whole library with my device.

With the Windows version 1709 (thus soon 2 years) Microsoft has changed the file system. There 2 new attributes were implemented, which allowed the user to have more data on the computer than physically intended. Files on demand is the name of this implementation. And in the File Explorer you can now find an icon in the synchronized areas which shows the status.

In simplified terms, in the first case (cloud only) different data such as name, file extension, creation date, etc. is synchronized, but not the actual content. Only when the user clicks on it, the content is transferred and the corresponding app is opened and the file is displayed.

You should always clean up. Files that are not needed "offline" can be converted to Cloud Only. This can be done with a single file, or with one or more folders. Then the storage space with the content is discarded. (Not deleted). It is then stored for this device only in SharePoint Online or OneDrive for Business or OneDrive Personal. You can also automate this.

A major difference between file servers and the document libraries of SharePoint Online is the versioning.  If changes are made to a document while working together, only the differences are saved, not the entire file. And I can also access the versions in the file explorer. This even works with OneDrive Personal. But only for 30 changes.

A quick backup for specific folders (desktop, documents, pictures) is set up in 2 minutes and then these files are automatically synchronised with OneDrive fo Business.

So if your hard drive fails, which I hope it won’t, you have a backup of these files in your OneDrive for Business.

So when we synchronize files with SharePoint Online and OneDrive for Business, you can see the results immediately in File Explorer. The File Explorer in Windows 10 behaves like an image of the document libraries, including OneDrive for Business. In the usual way. This also means that moving folders and files is also emulated in SharePoint. A Ctrl-X and in new place Ctrl-V is a move. Unfortunately, Microsoft has not done this with the last consequence. Moving a file in the browser always means that all versions of a file are taken along. However, this does not work in the File Explorer when moving between SiteCollections (different libraries).

[I informed Microsoft about this error in January 2018 and pointed it out again in October 2019].

So if you want to move a larger number of files, use the Move function in the browser.
So all information is shown in the Windows Explorer. If your organization has also migrated old Office documents to SharePoint Online, i.e. documents that are not in XLM format, no versions will be available. Therefore, the document must be converted to XLM format.

Microsoft has gradually implemented functions in Windows 10, so that switching between native applications from the Office world and the browser is (almost) no longer necessary. This is good for all those who still shy away from switching to the browser. So you don’t have to change the way you work to work with other people. You just have to know where the files are stored, and that is also my point of criticism. There have been several attempts to extend the limited search in Windows to SharePoint. There is no complete solution here yet. So if you are looking for documents, you should always use the browser version, because that is the best alternative, because SharePoint also looks into the respective documents.

Tip: If you know how to handle technical things, you can also learn more about individual things in the blog. Simply enter a term in the search window in the top right-hand corner.

for those who want to read it in german language