Microsoft published 2 new Updates on June 5th 2018. So the name of the Updates could be a little bit confuse:

… update for OneDrive for Business for Office …

If you think, yeah, that’s for the new sync engine, called New Generation Sync Client, you are wrong. it is for the old Groove.exe.With this Update the old Groove Version should be lift up, that you may migrate later on… But wait

Be aware that the update in Download Center applies to Microsoft Installer (.msi)-based edition of Office 2013 or Office 2016. It doesn’t apply to the Office 2013 /2016 Click-to-Run editions such as Microsoft Office 365 Home

To determine whether your Office installation is Click-to-Run or MSI-based, follow these steps:

But the description in the KB article is a little bit confusing:

OneDrive (OneDrive.exe) can take over the synchronization relationships from OneDrive for Business (Groove.exe) now.

After update you may migrate to the OneDrive.exe. But that is not always true. I descriobe with some pictures, what you may sync with these two sync clients:

You still have to use the old sync client called “Groove.exe) to sync to all of document libraries on all SharePoint Server on premises. The Next Generation Sync Client (OneDrive.exe) is used to sync  to all Document-libraries in Office 365 (SharePoint Online and OneDrive for Business).

So that’s correct, but we have to dive a little bit deeper:

You must use  the Groove client to sync data to all SharePoint Server onPremises versions. There is no selective sync (You may sync all or nothing). And there are more limitations in this KB2933738 article.

With the Groove client, and that’s is shown in the picture above, you may sync to IRM protected document libraries and other document libraries in SharePoint Online. And with that IRM stuff you have ta have it done till end of 2017. Although you are syncing with the cloud, you still have the same limitations, written down in KB2933738.

But only to the Cloud

If you want to sync your document libraries of SharePoint on Premise, you have to install/upgrade to Version SharePoint Server 2019, which will be available at the end of the year 2018. 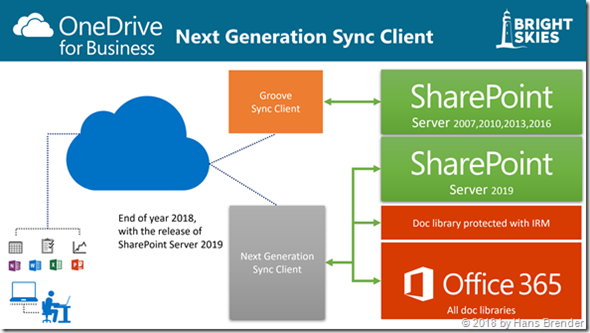