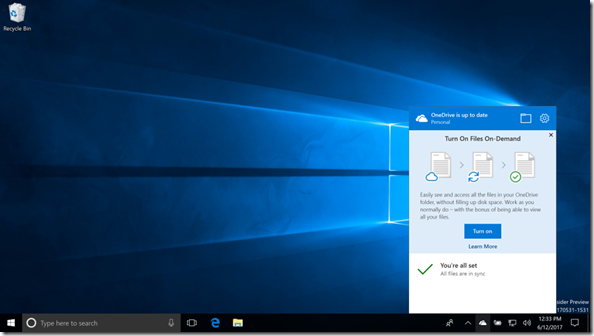 No, you as a normal User will not have this placeholder function at this time.
No, Windows 7 and 8 users will not get the Files On-Demand feature.

But let me explain…

On The Microsoft Build conference in Seatle, Microsoft anounced for the first time this new fonctionality. And for some of you, you may check this version right now. But only if…

At this time OneDrive Files On-Demand are only available in the preview version Build 16215. You may downlaod this version only, if your Windows 10 is in Fast Ring Modus. All other people have to wait until autumn this year. Then we expect the Windows 10 Redstone Update. This Update also have another name called Windows 10 Fall Creaters Update.

So I often read questions about: “When do we expect this function in other OSs?” To give you the right ansaer, we have to know, how this functionality is implemented:

The placeholder function was developed in an old sync client called skydrive.exe. And later Microsoft has developed a new Sync Client (Next Generation Sync Client), which

a) is running in a users context

c) may snc data only with the Cloud. No chance for On Premise users.

d) may sync data also with all doc libs of SharePoint Online (Office 365).

e) has included more the one language.

f) may connected with more than one Office 365 tenant

2) Implemention into the Explorer

So I have to write: Windows-Explorer. Yes, I also want to have my apple friends to work with OneDrive Files on Demand. But you have to know, parts of the funtion is implemented direct into the OS exatly into the Explorer function. That means, that Microsoft Windows developers has to integrate this. And Apple programmers would not integrate this function into the file finder. Apple has its own cloud…

So now you now, why, but also want to run it:

Bring your current Windos 10 Client into the Windows Insider program. Therefore you have to go to settings and then click into Windows Insiders Program.

If have donloaded and installed Build 16215 you may download and install version 17.3.6931.0609 of the Next Generation Sync Client. This Version will be automatically updated to version 17.3.6941.0614. You do not have to do anything. See also my own change log for addintional information.

and now you have to activate the function: